In March 2008, ShalomNewHaven, the newspaper of the New Haven, CT, Jewish Federation, published a partial report, link below, on discrimination in Israeli society. Over sixty “participants from other federations and organizations in the United States, Canada and the UK, and Philanthropies and philanthropic professionals participated in the investigation.”

This report does not cover discrimination in the West Bank where settler colonists get vast resources and the indigenous Palestinian population lives under military occupation, starved of water, land and infrastructure. It deals with Israel proper, comparing citizens who are Palestinian with citizens who are Jewish.

The partial report’s findings are scandalous. They were reported to the Israeli government. Yet it’s hard to impossible to find the full report anywhere.

The attached file is taken from a scan of that publication.  Its concluding statement, “[Israel’s] future depends on … a continued deep and fundamental commitment to a just and inclusive ]ewish democratic State where the rights of the non-Jewish minority are respected and the Arab minority can respect the aspirations of the Jewish majority as they together live in peace,” has not only been ignored since 2008 but with new laws Jewish anti-Arab discrimination within Israel proper has gotten far worse.

We urge you to read and share this article. 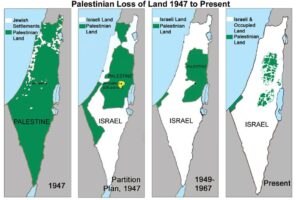 How the Map of Palestine has Disintegrated Since 1947 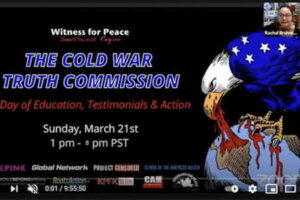 Petition to Congress:
We call on Connecticut’s Congressional delegation to work promptly and diligently to:

New Haven CT’s voters endorsed a November 2020 ballot referendum - "Shall Congress prepare for health and climate crises by transferring funds from military budget to cities for human needs, jobs and an environmentally sustainable economy?" - with a resounding 83% voting “yes!”

In summer of 2020 Congress voted and the President signed $740 billion to fund Pentagon in 2021. This is more than half of the Federal discretionary budget. The amount is greater than the total of military spending in the next 10 countries combined. The ongoing, unending wars since 2001 have cost us $6-7 trillion and climbing.

What goods and services could we have if we just sacrificed one plane, or one nuclear submarine, or skipped the new military Space Force?

Connecticut and the nation could
► move from fossil fuel energy to solar, wind and water,
► end all child poverty,
► fund excellent schools,
► renovate buildings to be clean and energy efficient,
► construct affordable housing

…If we REDIRECTED THE TRILLIONS OF DOLLARS NOW SPENT ON WARS AND WAR PREPARATIONS TO HUMAN NEEDS!

USPC DELEGATION AT THE UN